Yet another awful PC adaptation of a movie license by Capstone. In Miami Vice, you will take on the roles of Crockett and Tubbs from the movie (two players can play simultaneously in hotseat mode). Gameplay is typical platform fare that we have seen hundreds of times before. Eight levels span several different mini-games, none of which is particularly memorable. The levels includes climbing through warehouses in search of contraband, driving a sports car, standard shoot-to-kill levels, and racing a speedboat after the bad guys. This last variant is the most fun, but unfortunately not enough to make up for the tedium of previous levels. If you have played any other platform game by Capstone (e.g. Surf Ninjas), you will recognize this as another crappy release to avoid. Boring, to say the least. 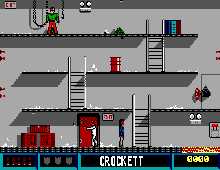