Maze Adventures is one of Keypunch's many game packages in which the company essentially stole freelance designers' works (most released as freeware or shareware on various BBS's), took out all credits, and sold them as the company's own games. This pack is notable for featuring games from only one designer: Scott Miller of Apogee fame. All four games in this compilation are maze games Scott Miller designed early in his career, and curiously enough Keypunch left his name intact in the credits (usually they replace them with "(c) Copyright Keypunch" text). The games are Diamond Digger, Block Five, Rogue Runner, and The Maze Machine. Every game in this bunch except for Diamond Digger were later re-released by Apogee (of which Scott Miller is one of the founders) as shareware titles in their Adventure Fun-Pak and Puzzle Fun-Pak packages. The games themselves are rather primitive, but as a whole they are worth keeping for Apogee fans or anyone who is interested in early budget games.

This is a pack of 4 different maze games: Diamond Digger, you run around and pick up gems. Block Five, is not quite a maze-game. It's five in row against the computer.

Another game is Rogue Runner. In this game you see very short a level with a maze in it. After that it becomes a bit dark and you have to find your way out. Last but not least you can make your own mazes with the Maze Machine. Print them out and give to friends. 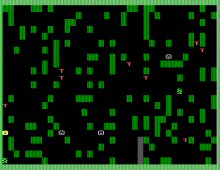 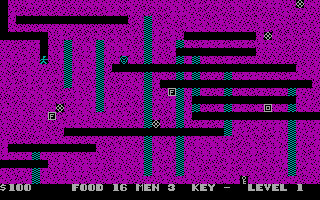