Yet another compilation by Keypunch in which the company essentially stole freelance designers' works (most released as freeware or shareware on various BBS's), took out all credits, and sold them as the company's own games. That the company was able to do this unchallenged in mid-1980s is telling of how much the Internet resembled a lawless "wild west" in its early days ;)

Master Blaster compilation includes three arcade games: Paratrouper [sic], Round 42, and Rockets. The first two are actually quite fun, but Rockets is a definitely miss. But if you have been playing arcade games since mid-1980s, you would have already played most of these games anyway. So, get it only if you are a completist like me - similar to Capstone, I just can't stop trying to complete my collection of Keypunch games no matter how horrible they are ;) 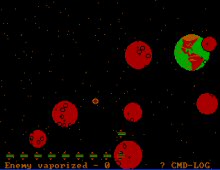