Magical Broom Extreme is another spectacular freeware shooter from Japan with jaw-dropping 3D weapon effects and very good gameplay. You control a cute little anime witch who shoots from her broom. The objective, naturally, is to make your way to the end of each horizontal-scrolling level to get to the next.

The enemies are plentiful and imaginative, although they are 2D sprites rather than full 3D-rendered, so some of the less-detailed ones look like cardboard cutouts floating around the screen. The witch herself looks very good, though, and so does the tiny little helpers you will get once you collect the right power-ups. There are many power-ups and different weapons you can use, and their effects are rendered in full 3D colors that look great even in DirectX (version 8 required) software-only mode. Like most other quality Japanese shooters made after 2000, anyone with 3D card will truly appreciate the production value of this game. You can keep your button pressed to "charge" your shot power (as shown in the "force" indicator at the bottom of the screen), and another key ('C') to do autofire. Too bad the game has only one big level, but hopefully the author will add more in the future.

Overall, Magical Broom Extreme is a fun, addictive, and drop-dead gorgeous shooter that, like many of its recent brethren, will make you admire the designer's decision to make such a high-quality freeware game as opposed to a commercial one. 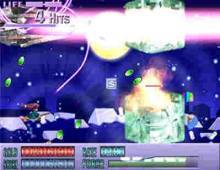