Madness Interactive is a fun Windows version of a Flash game of the same name, made by the guys at Flecko.net based on the popular "Madness" Flash series. This huge game features many gameplay modes, weapons, and naturally a ton of targets to maim and kill. Like the Flash series, the game is very violent - the all-grey palette only helps accentuate the red blood that you will often see gushing everywhere.

Similar to Double Dragon games or River City Ransom, you can use just about anything movable on the screen as weapons. There are many, many weapons and bonus items, including the very cool jetpack you can use to hover around the screen. And in true The Matrix fashion, you can use bullet time and switch guns. You can even customize your player to look like Jesus, a clown, or Agent Smith from The Matrix. The mouse-based controls take some getting used to, but fortunately the tutorial and "Experiment" mode let you practice to your heart's content before the real carnage begins.

The on-line Flash version of this game is undoubtedly among the largest Flash games ever made, and this Windows version does not disappoint, eiter. With an amazing amount of low-tech and high-tech weaponry, attractive South Park-style graphics, and very addictive (albeit bloody) gameplay, Madness Interactive is a must-have for any fan of beat 'em ups. Highly recommended! 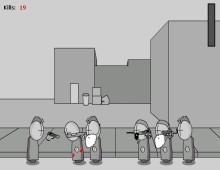