Lollypop is a good jump'n run game (there aren't that many good ones for the IBM-PC) by Brain Bug. One of the later games Rainbow Arts released. Very cute! The in-game graphics are excellent and the various levels are different enough to keep you interested. Gameplay is fairly typical of the genre though. If you like platform games, especially ones with cute background and characters, Lollypop is certainly worth the download. The nice adlib music was done by Vibrants. 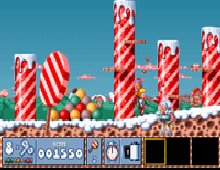