Well, what can I say? One of the worst games both from the mid 90's as well as in general. First it looks like a cheap copy of Mortal Kombat but once the fight actually begins it looks like super small children fighting against each other.

Of course there a few good features in Little Fighter. An example could be that you can play up to 3 different human players at a time - and all via the keyboard (can you imagine that?!?). You can also select different characters each with different skills (note that not many skills are included) but I didn't get the feeling that it makes any difference whatsoever.

The graphics are acceptable but gain not very impressive especially not considering the year of the game was developed. But remember that this not from any of the big game companies so you can't expect too much simply because of the limited resources. Overall not a great fighting game at all and I wouldn't really recommend this game to anyone - not even if they like fighting games. Little Fighter simply isn't good.

A fun and hardly-known multiplayer fighting game that's designed by Marti Wong, resident designer of Softstar (one of the best Taiwanese developers). Up to 4 players can join the all-out fistfights that feature cute SD-style graphics and cool weapons. Animations are superb, as is the control scheme. The game is most fun with friends huddled around the computer :) Be sure to check out the even better sequel Little Fighter 2! 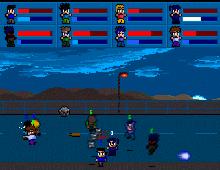