The Line Continues is a great sequel to The Line, a very original freeware platformer from Bepposoft. The plot, in the designer's own words, is almost as wacky as the game itself: "It seems The Line continues. You've been running from a long time, but maybe your run is going to end. Maybe there is something. Something apart from you. Something you could reach, getting as many linesavers as you can. Maybe it's not only a presentiment: it exists. The end of The Line exists. Or maybe not? Why wonder? You can't turn back. Your world became more dangerous, your enemies more cunning and cruel, the end of your world closer and closer, behind you. You can't do anything else than running. In front of you there are the enemies you already know, but with your advance some others, unknown since now, will income: jaws could be opened under your feet, or you could be poisoned and paralized by strange crawling beings, or being flatted by something unexpected at your back. Enemies that you can face only with your new abilities. Now you can leave your world for some instants, you can quickly levitate like a bubble but, like a bubble, you will be more vulnerable. But don't fly too long, anyway you're a wave, a part of The Line, and you must return there. Moreover, you will find new powers through your way. They will become many useful in difficult moments. Before you start your run again, it's better that you know one other thing. The imbalance of forces you gave rise in your world at your birth caused an equal and contrary wave-effect. More you proceed in your walk, more this negative being become strong and powerful. Probably you will find him, first or then. His defeat will sign your victory."

Confused? Well, that is probably what the author intends ;) Like The Line, The Line Continues features a very unique platformer style: your character is formed from the 2D outlines of the grounds, and all of the enemies and their attacks are formed the same way. This makes for a very unique gameworld, although the gameplay itself does get repetitive - but fortunately the novelty value and cool new powers you discover from level to level are enough to attract you most of the way. The gameplay balance in this game is much better than its predecessor: you will no longer find yourself dying suddenly from energy waves that seem to come out of nowhere. The ability to fly and die new deaths make the game even more fun than the original, especially to those who find The Line too frustrating. Highly recommended to platformer fans everywhere - and look forward to the third and final game in the promised trilogy :) 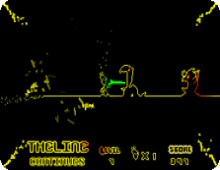 People who downloaded this game have also downloaded:
Line, The, Legend of Shadow (a.k.a. Legend of Kage), Prehistorik 2, Little Samson, Last Defender