One of the most entertaining and original shooters ever made, The Last Eichhof is the great freeware game developed by Alpha Helix, small Swiss outfit and guzzlers extraordinaire. Derrick Steel sums up the game succinctly in his entry on MobyGames: "In what has to be considered one of the most "original" games of all time, you are a flying beer in space. And the evil corporations are coming after you, so you must use your "beer power" to fight off wave after wave of corporate beer."

To be more precise, your goal is to defend the Eichhof Brewery from the imperium of invading "big beers," with bottle caps and other imaginative weapons that only beer lovers can appreciate ;) Enemies, of course, are various types of beer: small, large, kegs, you name it. There are only four levels, but all of them are a lot of fun. From rival beers in the first few levels, you will get to fight other booze (coktail, whiskey, etc.), and in the final level you are faced with things that are associated with hangovers on Sunday morning, including apple cores (ugh), pretzels, coffee cups, the toilet. You earn money for each kill, At the end of each level. you go to a bar where you have the option to purchase power-ups for your sh... I mean, beer bottle. Overall, The Last Eichhof is the rare freeware gem that does get the humor across -- with all the fun intact. Highly recommended, especially to anyone who can identify with the all-important journey from party to hangovers ;) 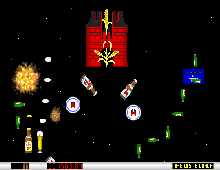