A horrible 3D game from Ken Silverman, wonderboy creator of Build Engine, the groundbreaking engine behind 3D Realms' Duke Nukem 3D-- arguably the first game that posed a serious threat to id's DOOM as the king of FPS genre. The plot: escape from an underground labyrinth while trying to rescue your dog and save the world at the same time. While Ken's humble beginnings are more or less—well, humble, his knack for level design and real-world physics is evident. Unfortunately, the god-awful graphics (which are even worse than Catacomb Abyss) and hackneyed monsters make it very hard to see that talent. Hardcore FPS players will recognize some wall textures from Pixel/Future Crew, and an engine that is remarkably similar to id's hit Wolfenstein 3D. Overall, a pretty bad shooter that you should try only if you want to see what early an Ken Silverman is like before all the brouhaha about Duke Nukem 3D. The game used to be sold as shareware by Epic, but Ken has recently released it as freeware on his website-- for better or worse. 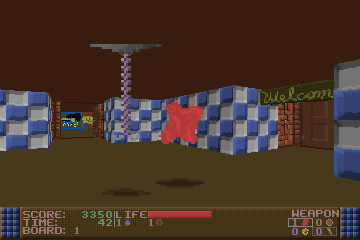