Jump n Bump is a simple platform game for from two to four players. Each player controls a bunny, and has controls to walk the bunny left and right, or jump. The only goal is to jump atop of the other bunnies, which explode in a huge red mass of gore as you accomplish this task.

There's a great contrast between the bloody nature of this game and the cute presentation. The bitmap graphics are very nice, and the happy background music has a cool oldskool flavour in it. The few sound effects are perfect, especially the smack! which fanfares the explosion.

As the idea of the game is very simple, it wouldn't be a wonder if this sort of game would begin to feel very boring in a relatively short time. Jump n Bump avoids this. The gameplay is, well, quirky. The rabbits have inertia in just the right quantities which retains the feeling of player's absolute control over the bunny, but still causes it to be just that little bit inaccurate - this results in fun unpredictableness. And although only one level comes with the game, it's very well designed, and there are many additional levels available from the official game page.

This is an excellent game, fun with two players, hectic with three and utterly chaotic with four. Recommended to boot! 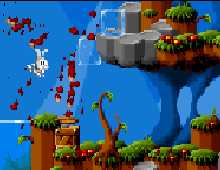