Catch 'Em is an interesting platform/action game from Prestige, much better known on the Amiga. Adrian Simpson gives a good description of the game in his review for the Amiga Games Database:

"If you could only use one word to describe Catch 'Em, then it would have to be 'quaint'. You play a zookeeper called Jeff, who has been careless enough to let all the primates escape from his zoo. The intro shows Jeff reading his newspaper as various apes walk out through the gate. It's like the start of The New Zealand Story, (another side-on, scrolling platform game) except that the animals haven't been kidnapped this time, but have made a break for freedom.

For Jeff, pulling out his high powered sniper rifle and shooting the fugitives through the head isn't an option, as they aren't particularly dangerous and the zoo wouldn't be very interesting afterwards. So, Jeff thinks up an alternative plan. He drives his monkey catcher van up to each level, parks it, finds some bananas and waits until a monkey starts to devour the feast. He then clobbers the animal with a baseball bat, bags it and then throws it through an ape trapdoor. As you would in the situation. As is often the case, the game logic doesn't make much sense in real life, so you have to get into the world of the game and play by its rules.

So, as with all action puzzles, there are rules. A clock slowly ticks down, giving you a certain amount of time in which to trap the animals. You only have certain resources (e.g. a finite number of banana boxes) and a long fall stuns you for some time.

In later levels, monkeys find their own bananas and leave the skins for you to slip on, thus delaying your progress. You can nail these boxes shut, but they can't be opened with force later. The levels naturally get larger, harder and feature more animals. Other tools can be found in your van, which help in the round-up too.

The music is jolly and the graphics are bright and colourful (sometimes a little garish). It's an inoffensive game which might not last you forever, but is still worth a go."

This PC version, naturally, has inferior graphics compared to the Amiga version, but the gameplay remains the same. All in all, Catch 'Em is a decent, slightly above-average platformer that sounds much better in concept than in reality. It has been done before and better in Opera Soft's Livingstone games. 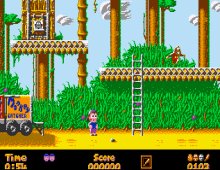