This is definitely a weird game. Though I somehow managed not to be THAT bad in playing I never quite got the objective - sure, Joust - the name says it all, somehow you, on the back of that bird, have to fight against the knight on the flying horse - and against that dragon too, if it happens to come up. Well, so much about that. Try it - can be fun sometimes. I've included Moslo in the zip and the file joust.bat was made by me - maybe you'll have to play around a bit with the settings, the one I included worked for me, but I was working on a Pentium 100, so it might be different for you.

Joust (not to be confused with Atari's classic arcade game of the same name) is a fun strategy game based on Chess. In the designer's own words:

"In this game each player has a Knight which moves as in Chess. However, once a piece has moved, the square it was previously on cannot be entered again by either player. The Knights cannot capture each other. The object is to leave your opponent without any moves.

Joust features five levels of computer opponent, and can also be played by two human players. The computer opponents range from the randomly-moving 'Gorilla' to the very strong 'King', but all are beatable if you persevere.

I don't know who invented this game. I came across it as an ancient Amiga PD game, although in that version the pieces started in a fixed position in the centre rather than being randomly placed on opposite sides of the board. As well as the game of Joust, the program allows you to try the "Knight's Tour" puzzle for boards of size 5x5 up to 12x12." If you enjoy Chess puzzles or coffee-break board games, check out this small but incredibly fun old game :) 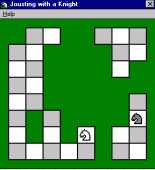