Jackal is a decent PC port of another NES classic from Konami, although with much inferior graphics and sounds. The plot is as banal as any other Rambo-style game, but here it is anyway: you are a commando code-named "Jackal," sent to rescue American POWs from a Vietnamese prison deep inside Cambodia.

Gameplay is standard kill-and-rescue fare, except that you control a jeep as opposed to just the commando. Jackal consists of six "enemy territories" and is played from an overhead perspective. Your only weapons are a machine gun and grenades (which could be upgraded to missiles later in the game). The graphics are nothing to write home about—and they are actually inferior to Metal Gear, an earlier Konami game. However, it's the gameplay that matters, and Jackal does not disappoint. The jeep controls very well - the only problem is that sometimes your jeep can get hung up on a wall. You can only fire the machine gun in one direction (upwards), although you can throw the grenades in any direction. In order to rescue the POWs, you must blast open the POW huts and pick up the POWs as they come running out, then deliver them to a waiting helicopter. You will also find other huts scattered around that are colored differently from the normal ones - inside these huts are special POWs. Pick those up to upgrade your grenades - first to a missile, then to a two-way explosive missile, and finally to a four-way explosive missile. To make the game more challenging, there is only one special POW in each hut, and only a couple of huts in each stage. In contrast to most Konami games, the "bosses" in Jackal aren't very impressive, although the last boss (huge laser tank) is very difficult to beat.

Overall, Jackal is another solid shooter from Konami that will keep fans happy. You can even mow down unsuspecting enemy foot soldiers with your jeep and see their little flattened forms lying motionless on the ground—years before Cannon Fodder. 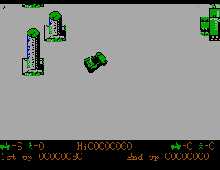