Into The Eagle's Nest

Perhaps best described as Wolftenstein 3D from top-down perspective, Into The Eagle's Nest is neither as addictive nor revolutionary as that id classic, although it embodies the same find-keys-to-unlock-doors puzzle element mixed with standard shoot-everything-in-sight gameplay that will be familiar to any arcade fan. The top-down perspective severely limits character animations to jerky, very blocky movements, and makes all the enemies look identical. Worst yet, there are simply too many enemies in the game and too little ammo to pick up, making the game impossible for all but the most expert of gamers. Steer clear of this one if you are frustrated easily with this type of game, and just play Wolfenstein 3D instead if you are itching to unlock doors in action games :-)

Very addictive game, infiltrate in the eagle's nest. You game is played from a topdown view. In each level you have to find an elevatorpass to gain access to the next level. But be careful of the nazis, they are almost behind every door. Along your way you find enough ammo and health to stand against those nazis. 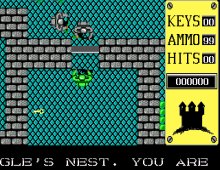 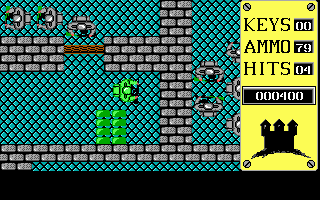 Into The Eagle's Nest screenshots