Indiana Jones and the Temple of Doom

Oh yes, this is a good example for a game that probably never should have been made. It's a weird action-mixture made up from the movie of the same name. I bet they could have made a nice adventure of it like they proved later. Well, they rather made up an Indy 4 than having a look at the previous movies to create an adventure from them. Alrighty, but did it have to be this... run around and kill some snakes (oh yes, we know - Indy hates snakes...) and other bad guys? Just like in the film you are running through the mines and free children. Your whip is your weapon...

Maybe I sound too pessimistic, to be honest I've played (and enjoyed) far worse games. The game is playable, but it's just not of the high standard the adventures set - it's not even as good as the action version of Indy 3.

Indiana Jones and the Temple of Doom is a disappointing PC port of the average arcade version of the second Indiana Jones movie. The description and review at MobyGames says it all about this poor use of a blockbuster license:

?The Good:
There's not much I like about this game. Nevertheless, the mine cart levels are fun to play. And when I first played the game (a long, long time ago) I thought the title screen looked great (Look, it's Harrison Ford!). Also the game had the original Indiana Jones tune.

The Bad:
Well there are really just three different levels. The mine level, the mine cart level and the temple levels. When you've completed a temple level, you have to play another mine level to save some more children, after which you have to escape in a mine cart AGAIN etc. Of course the levels do get tougher. The designers could have done so much more with this license. Following the story line of the movie for example (I admit I was looking forward to eating monkey brains :-) ). The problem is that this game is a conversion from a simple arcade game. And there's no room for a story line in arcade games.

Bad controls make the game really difficult when you're approached by several enemies. And it's not always easy to hit a fireball with your whip.

The sound of an approaching bat is not what I like to hear. But then again most of these old games have sound effects (using PC speaker) that make me turn off the sound.

The Bottom Line:
A not very interesting conversion of an arcade game that uses an Indiana Jones license. If you want to play a decent Indiana Jones game, play Fate of Atlantis. Even if you can look past the dated graphics and sound you probably won't enjoy playing this one.? 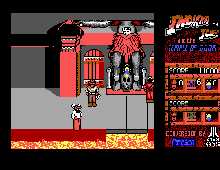 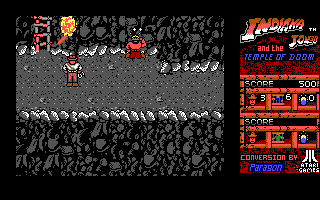 Indiana Jones and the Temple of Doom screenshots

People who downloaded this game have also downloaded:
Indiana Jones and The Last Crusade - The Action Game, Indiana Jones in: Revenge of The Ancients, Golden Axe, Duck Tales: The Quest for Gold, Duke Nukem: Waiting For Forever