A worthy third-place winner in the first Remakes Competition at remakes.org, Impossaball is a great PC remake of a classic Spectrum/Amstrad game of the same name, originally released way back in 1987 by Hewson and designed by John Phillips, the brains behind Nebulus as well. In Impossaball, you control a bouncing ball that moves left and right along a horizontal-scrolling arena. Starting on the far left of the screen, your goal is to knock the ball against color cylinders while avoiding various hazards such as spikes, mines, and monsters - all the while trying to reach the far right of the arena before your time runs out. The graphics are a bit lacking in colour and the sound effects are simplistic, but the gameplay shines. As the name implies, the ball really is almost impossible because of numerous awkward gaps you have to squeeze through, dozens of spikes that your ball can too easily run into, and various other dangers.

Like in the original game, Impossaball is easy to learn, smoothly executed, and just plain fun to play. If you love arcade games - and especially difficult games - Impossaball is a must have. The game's addictiveness will keep you coming back for more frustration and fun. 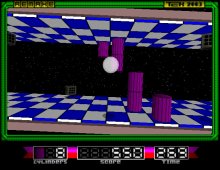