Humphrey is a great remake of one of Ziggurat's best action games that is basically unknown outside Spain. In the remake author's words: "in 1988, Zigurat released a game that ended up being one of the best Spanish games of all times (although pretty unknown out of Spain): Humphrey. Its cute graphics and addictiveness overcomes its great difficulty (which I've tried to take down on this remake), made this game one of the most remembered by all the Spanish 8 bit games fans. In Humphrey you take the role of an alien movie megastar from year 2454, who, being at the very edge of madness due to his fans mercyless besiege, goes for a quiet retirement on his brand new mansion, built on a secret place from the galaxy... only to find most of the house's forty rooms are not finished yet, his fans have located and invaded the place, and the worst thing of all for his poor tortured mind: all rooms are painted on the wrong colors! If Humphrey wants to stay on the world of sane men, he will have to get his paint bucket and his paintbrush and do the work by himself, avoiding the hordes of mad fans that are hunting him down looking for an autograph..."

Your job, as Humphrey, is to paint the floor of all his house's forty rooms. You simply step on a tile to paint it, but you must be careful not to fall in holes, get electrocuted when stepping on electric tiles, or killed by various enemies. While you cannot attack, you can jump over long distances and change directions in mid-air. There are also special tiles you can step on to help make your job easier. These include the "off" switch for electric tiles, mobile platforms that can move you across vast distances, bombs that kill everything in sight, teleport tiles, and many more. There are also the usual power-up tiles such as health, extra life, and extra points.

The combination of frantic action, attractive cartoon graphics, and fun gameplay make Humphrey an addictive puzzle/action game that does deserve to be known outside Spain. Ignacio Gil did a fantastic job converting this game to Windows PC and upgrading the graphics. It is too difficult for me, but expert action gamers should have no problems. Recommended! 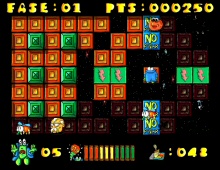