Essentially the same game as Quicksilver's earlier Guerilla War, Heavy Barrel is your basic top-down shoot em' up game. As in Guerilla War, the game features responsive controls, a lot of enemies, and is very quick to pick up. However, what makes this game different from, and much inferior to, Guerilla War is the fact that you can no longer ride in tanks, and stages are much easier and shorter. Fortunately, the co-op mode still remains so you can play with friends (although given how short it is, you won't need much help).

Heavy Barrel does have some strong points, such as letting you upgrade your bombs. Blue bombs are rather weak, but much more powerful than your standard bullet. Red bombs are the strongest weapons in the game: they can destroy a boss within seconds. Running out of red bombs, and you'll quickly find that boss fights take WAY too long and quite repetitive. This makes for a strange imbalance in the game: you'll finish the stage in minutes only to spend much more time with one boss. In the final analysis, Heavy Barrel plays too much like Guerilla War and thus is more of a clone than a new game, and isn't nearly as fun besides. Play it if you like Guerilla War or simply must play every shoot-em-up ever made. 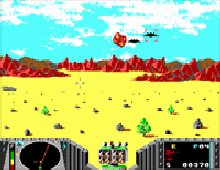