One of the classic action games from the 80's. If you know games like Ikari Warriors or Commando you will notice many similarities between the games but hopefully you will also agree on that Guerilla War is the worst of the games.

You control a single soldier and you have to shoot your way through hundreds of enemy soldiers and complete different levels while at the same time rescuing several prisoners that are most likely soldiers from the army that you are in. It sounds fairly simply and the gameplay is that as well. But that doesn't make the game bad for true fans of this genre as you can easily spend hours on a game like this. At the end of each level you will encounter some kind tough bad guy that is far worse than the enemy soldiers you shoot down.

One huge mistake in the game is the very small game area. The screen is not used fully at all. Although it might be because of the conversion to PC format it would have been great if Quicksilver had changed it so the game screen was wider so you could see more. The area where you can move around at is too small to really enjoy the game fully and it's not near a game like Commando at all. Still worth a try for the action arcade fan.

Arguably Quicksilver's best arcade conversion, Guerrilla War is an outstanding top-down shooter. The controls are simple and and very intuitive, you to shoot and let loose some heavy artillery with ease.

There are a ton of stages tucked in this game, and on top of that, they are absolutely huge. The end-level bosses are fun, innovative, and a big challenge. There are always numerous targets for your trusty gun, which can be altered by power-ups you pick up on the way such as lasers, flames, or even missiles. You can also hide in the trenches left behind by the enemies, take cover, and even get into tanks found along your way! The tanks are definitely the best thing about this game: not only can they be driven, but they can even be powered up just like your gun. When you are inside the tank, you cannot be injured by the enemies and can simply run them over (can we say "splat"?) Mindless, gory fun at is best. Tanks don't last long, however, and when they blow up you will get heavily injured if you don't escape fast enough.

You can also pick up hostages along the way for a thousand point bonus, but if you accidently (or purposely) kill one you loose five hundred points. And, to top it all off, you can play the game with a friend in an excellent co-op mode that makes it twice as fun. The only gripe I have is that towards the endgame the stage design gets a little too far-fetched given the modern commando theme, and some are very difficult to pass. Overall, Guerilla War is a must play for all arcade fans. It may not have the depth of Metal Gear but it's got everything else: a ton of stages, even more enemies, challenging boss characters, and fun power-up around every corner. 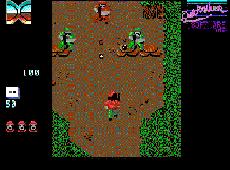 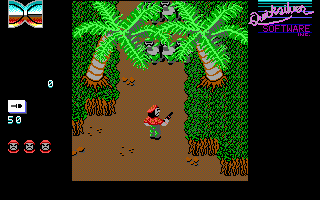