Gorilla is a cute little BASIC game included free with the first version of Microsoft's GWBASIC program (the other being a GWBASIC version of Nibblers). Casting you as a huge gorilla, the game is extremely simple: when it's your turn, you type the angle and how strong you want to throw your banana in hope that it would hit your opponent (either the computer, or another human player). Despite the simple premise, the game is not as easy as it sounds. There are 2 obstacles that you will have to deal with: the blowing wind, and tall buildings on the screen. If you don't take strength and direction into account when throwing the banana, you'll never hit the opposing gorilla. If your banana hits the buildings, it will explode on contact. Having this "explosive banana" therefore leaves room for some strategy, since you can either try to get the banana over the buildings, or you can try to explode your way through them to reach the enemy gorilla.

Overall, Gorilla is a good example of a small, but well-coded BASIC game with which you can spend more minutes than you realize. The simple gameplay and primitive graphics probably won't make the game addictive for anyone, but it's certainly a lot of fun while it lasts. Recommended, especially as a quick game you can played with a colleague during coffee break :) 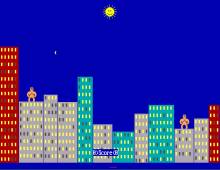