Goody is a fun 2D action/adventure platformer from Spanish developer Opera Soft. You play a small thief bent on robbing a Spanish bank. Before embarking on this venture, you'll need to find appropriate tools for the job, including torch, pincers, etc. Once you gather all the necessary tools, you will be ready to launch the crime. But things are not as easy as they seem, of course. Along the way to the bank, you will have to avoid or deal with policemen, gorillas, kung-fu experts, weeping women, paper airplanes, and other obstacles in your way.

Anyone who likes Codemasters' classic Dizzy series will probably enjoy Goody. It is a fun game in the "video adventure" 2D action/adventure genre that was very popular in Spain in the 80s - 90s. While the game is a traditional adventure in that you need to use inventory items in the correct places, it also requires the same combination of good reflexes and timing as typical platformers do. Sharp cartoon graphics with a lot of detail (even with the limited 4-color CGA palette), smooth animations, fun puzzles, and a charming atmosphere makes Goody well worth a look for action and adventure fans alike.

A nice little side-scrolling platform game. Goody features you as a crazy little burglar guy, who bounds around the place collecting tools for his task to rob the big bank. While you are jumping around though, you have to look out for the policeman, and other various enemies that you'll encounter. Beware, some of them are rather…. Odd ;)

I had another little play of this game after it was added to the site. I couldn't remember how hard it was to control him! The controls on this game are quite tricky, you use the a, z (up and down) and the o, p (left and right) keys if I remember right. Sure that isn't too complicated, lots of games use those keys, but when it comes to jumping ARGH!! I think it hates me! You can only do running jumps, he will not jump up and across! Which can make things really difficult.

The graphics are ok, with their basic orange and green colouring. Monuments of Mars here we come. The pictures are all really cute, and it's great for a 1987 game:) This game is great apart from the fact that he just won't do what I instruct him to! 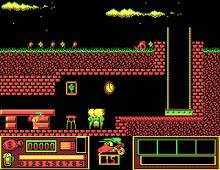