Livingstone Supongo (Livingstone I Presume in English) is arguably the best game released by prolific Spanish developer Opera Soft. The game is another release in the very popular "video adventure" genre (i.e. 2D action/adventure platform-style game), but it is leaps and bounds better than most of its competition due to large, complex gameworld, and many interesting gameplay features.

The game casts you as Henry Stanley, the famed journalist who was sent on an expedition in 1871 to find legendary adventurer Dr. David Livingstone, who had been missing in Africa for three years. The name of the game is actually the phrase uttered by Stanley when he finally found Dr. Livingstone: "Dr. Livingstone, I presume?" Your task in the game is the same as Stanley in history: find Dr. Livingstone by navigating the treacherous jungles of Africa, and dealing with all manners of wildlife.

The gameplay will be familiar to anyone who has played Goody, or other 2D adventure game. The game is much more action-oriented than Goody: you have 3 weapons and a pole in place of standard inventory items, which you will use often to defend yourself against hostile animals. Most "puzzles" consist of figuring out how to get from point A to B. Although this is a common gimmick in most complex platformers, although Livingstone implements them in an interesting and challenging way; one of the reasons the game is a lot of fun is that you never know what to expect in the next screen. Sharp graphics and excellent gameplay makes this one of the best 8-bit platformers you'll likely find. Highly recommended!

This game is also known as "Livingstone Supongo" (in Spanish I guess), but you might know it better as "Livingstone I presume". In this game you are the journalist called Henry Morton Stanley. He is known as the guy who spent 8 months travelling around and through Africa to find Dr Livingstone. The doctor had been missing for over 3 years, but was found in great health in a small African village. He wasn't lost at all but had been detained as he had gotten sick and was short of supplies. The famous "Dr Livingstone I presume?" phrase comes from when Stanley found the doctor and didn't quite know what to say to him.

This game is a lot like the actual task was. You are to journey around in Africa and find Dr Livingstone. (Except I assume you are not an arrogant pompous git like that Stanley guy was ;) Hehe). So you are in this side-scrolling action adventure. Who knows what could happen in the next screen? There are many jungle predators that want to eat you, and you must find the good doctor.

The graphics are great, and the sound is your typical PC speaker. Overall its got great gameplay, and isn't as predictable as you would want it to be. 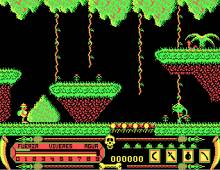