A fun platform game from Loriciel, Golden Eagle features fluid animations that rival Jordan Mechner's classic Prince of Persia games, as well as an intriguing blend of action with elements from adventure and puzzle genre.

The plot in Golden Eagle is hackneyed, but at least there are some elements of surprise: you are a (what else) hero sent to recover the Golden Eagle, a statuette with mysterious powers that was stolen by an evil sect. Although the box touts "action/adventure" gameplay, adventure game portion mostly involves only finding the right switch to deactivate security systems, much like Epyx' Impossible Mission 2. Loriciel, true to their reputation as developer of innovative games (similar to Exxos), even includes a full-featured Reversi board game within the game, which has a decent AI and even "hint" feature! Another neat feature is the on-line dossiers of major characters and an e-mailbox, which relays new instructions for your mission as you make progress. Unfortunately, weapons in Golden Eagle are quite ordinary, and levels are too repetitive to hold anyone's interest for long. As an example of what action/adventure should be like, Flashback fits the bill much better, although Golden Eagle deserves notice for its fluid animations and fun storyline that unfolds as you play. 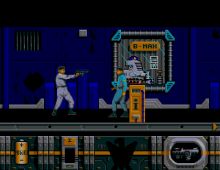