Gladiator is a fun top view, real-time action/RPG game with a good dose of strategy thrown in. You control a team of mercenaries who fight for the glory and riches. Along the way, you will explore a fantasy world full of typical monsters such as the undead, elementals, and so on. In RPG fashion, your gladiators will gain levels and new powers as they defeat more opponents and accumulate treasures.

The gameplay is easy to learn, although the graphics may seem to amateurish for some. You start out with some money which will be used to hire warriors, archers, slimes, and other creatures to form a small army. You then train and control these members as they battle monsters in real-time. Up to four players can play on a single team, and you can split up the party into smaller ones if you wish. A nice feature is that you can control either one unit at a time and leave the rest to the computer, or the whole army simultaneously. The battles are quite simple - you only have a few choices such as melee, ranged attacks, and using special skills (e.g. healing and turn undead for Healers). Since the game is played in real-time, it's not uncommon to see dozens of units at a time on the screen, and all you'll have time to do is to keep your troops together so no unit will go off alone on a suicidal attack. Some maps (i.e. levels) have special features including teleporters or locked doors, but the terrain is typically used only to either help you plan your attacks or shield yourself from the enemies. Similar to Warhammer games, the story is told as you move from map to map, in the form of your diary. Sometimes you will get an ally or two during the scene (they oddly seem to die easily, however).

Overall, I enjoyed Gladiator. The blend of RPG, action, and some strategy elements is quite well-mixed and stirred. If you enjoy kill-everything action games with more depth, Gladiator is well worth your time and $10 for the registered version (which offers more levels and unit types). It's a great bang for your buck, especially since up to 4 players can play, and you get a nice level editor as a bonus for this great old game. Please note that the download here is the latest freeware version, which is missing many character types and special abilities compared to the registered version. So if you like the game, register today for only $10! 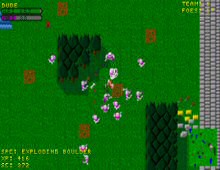