Gene Rally is a racing game for one to six players. You'll be racing on various tracks in time trial mode or against human and/or computer opponents in championship mode. Unlike other games all of this has to be setup as you will otherwise be racing against yourself. So remember to start by adding drivers. There are many different tracks included as well giving you a good selection to choose from. In case those aren't enough you can use the included editor to make your own tracks or edit the current ones.

The overview and interface in the game is great as you can see the entire track all the time. The "race engine" is quite good as well although some might find it a bit too much arcade as you almost have to stop speeding and just turn the car and hope for that you don't hit something in each corner but it is also great racing once you get the feel with controlling the car.

The graphics are quite good considered how small everything looks and all the nice small effects such as when you break on the road you will see marks on the road afterwards and you can also hear a whining sound. Overall a decent racing game offering the same kind of gameplay as seen with some of the most popular racing games on the Amiga.

An arcade car driving simulator; you see the whole circuit on the screen, and you have to drive your car, choosen from many available, as simple as that. The game comes with an editor included, that will allow you to create your own circuits, and you can fully customize computer operated drivers, to have always a worthy challenge... GeneRally also shows a certain attention to details, so when you take a curve too fast you'll hear the tires, and see them leaving a mark on the road... this is much, considering this game is freeware.

Technically the game's good, the graphics are cool and the sounds do their work in a decent manner, overall an above par freeware game, download it, you won't be disappointed.

The freeware racing game GeneRally, just like Slicks 'n' Slide, is great fun. Its exciting, fast and twice as fun with friends, everything you'd expect from this type of game. But GeneRally goes a step beyond Slicks 'n' Slide, with its full 3D tracks and vehicles, not to mention amazing(and free) track editor.

The tracks are really the best thing in GeneRally, since the rest has been done over and over in Slicks'n Slide and its many clones. But even though that sounds like a bad thing, it really isn't since the tracks add a new dimention(literally) to the tried and true gameplay. The tracks are full 3D with trees, hills, houses and rocks you can drive behind and over. Although these can cause problems at times, ie getting lost in a forest, they add a lot to the game and are a welcome addition. One thing that did bother me is the hills are sometimes hard to make out, which means you can fly off the track from a hill you didn't even know was there. But this is a minor quibble since you'll know where all the jumps and bumps are after a few laps anyway.

The obvious bane of these types of games is they tend to get repetitive, but thanks to GeneRally's wonderful track editor this is not a problem. The track editor is so easy to use you'll be finished you're first track within five minutes of starting it up, and it will be a *good* track. Add to this the piles of tracks coming from the community and you'll be entertained for a good while to come.

As the natural step up from Slicks 'n' Slide, fans will love GeneRally. But you don't need to be a fan to have a great time. With or without friends, GeneRally is a lot of fun - and it's freeware to boot. 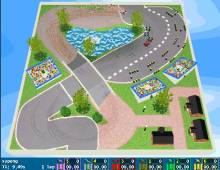