Full Metal Jacket is a decent giant robot action game from Korean developer Mirinae. Viewed from a top-down perspective, the game plays like a cross between Zone 66 and Chaos Engine - although it is not as good as either game.

First, the plot: at the end of 20th century, countries around the world have formed three major economic blocks: American Nations Association, European Nations Association, and Asian Nations Association. A war broke out between Europe and the allies of Asia+America. Europe lost the war, and victors Asia and America decided to form a special association called "Endira" to eradicate the last remaining traces of Europe. The "Ashurakumara" is the Endira's special force that employs big walking robots with awesome firepower. Your job, naturally, is to pilot one of these robots and terminate all resistance.

The game uses a nifty 360-degree rotating engine that gives a nice illusion of it being a 3D game, although the game looks more like it uses a 2.5D engine. If you have played any of Safari Software's shareware action games, especially Seek & Destroy, you will feel right at home with FMJ. The graphics look too pixellated for a 256-color VGA resolution, though it is tolerable. Explosions are appropriately big and loud, and a small radar helps you keep track of enemies in the area.

While it is fun for the first few minutes, it is not long before the tedium of FMJ sets in. There is just not enough of anything - weapons, enemies, level designs, mission objectives, robot types - to keep you glued to the screen. If you like straight military shooters, play Jungle Strike or similar games instead and pass up on this deservedly obscure game. 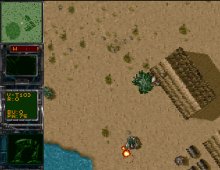