Frantis and Frantis: Mission II are two decent freeware action games with banal save-the-world-from-alien plots, but passable gameplay and graphics. Nothing much to say here, except that the games are done in different styles: the first game is a 2D side-scrolling shooter, while the second is platform action set in the enemy's base. Both are marginally above-average games that should keep action fans happy for a while. Not recommended if you want to play only great games, though. 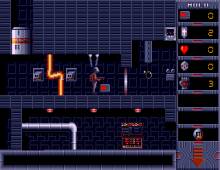