Like Panda Entertainment's Sango Fighter and Sango Fighter 2, Fong Wan Tien Ha is centered around China's Han Dynasty during the times of famous "three kingdoms" period popularized in KOEI's strategy games. Since the game is based on the same historical period, several of the characters featured in this game are also in Panda's games. This game has nice background stages - some even have foregrounds. The problem is, some of these foregrounds obscure the action. As for the characters, they are drawn poorly and look too cartoonish. They handle terribly in battle, and their special moves are very difficult to execute. 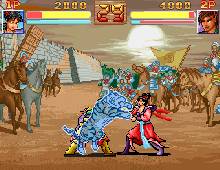