Eye of Horus is a neat platform game set in ancient Egypt-- you must venture into the depths of the pyramid to find the magical Eye of Horus. The best thing about this game is that as shaman, you can transform into a bird at any time by pressing the 'UP' arrow key, to explore the higher levels. Unfortunately, the game is too easy and the levels to monotonous to make exploring worthwhile. More enemies and diverse levels would have saved it from obscurity.

Eye of Horus is a very fun platform game. I have included an excerpt from the manual to better explain the story line of the game (it's a pretty powerful and beautiful one you see):

"The story, chiseled in stone, is about a once powerful king names Osiris. Osiris was a benevolent King, loved by all - except for one: his half-brother, Set. Set tricked Osiris into lying in a chest. Set then nailed the chest shut and sent it down the Nile, hoping to end his brother's life.

But just as the captive Osiris was about to breathe his last breaths, his beautiful wife the legendary Isis found the chest with her dying king. In the joy of their reunion they conceived a son whose name was Horus. Osiris never lived to see his son - for he died in Isis's arms. She ried to hide his body, for fear that Set would find it. But to no avail... Set did find it. And he tore the corpse into seven pieces, scattering them throughout the tomb. Now it is well known that a soul can not lie in peace unless his orpse is whole and properly placed in its arcophagus. Even his loved ones are unable to est until his body has been restored.

And so it is that neither Osiris, nor his family - Isis and Horus - is depicted on the final aintings inside the labyrinth. And not until orus reclaims the scattered bones, returns them to the sarcophagus and defeats the evil Set, will Osiris and his family reclaim their rightful place on the eternal sandstone of the burial chamber.

The unfinished legend is now up to Horus. And up to you."

So it's your task to journey around the pyramid. One cool thing about this game is that as shaman, you have the ability to transform into a bird at by pressing the upward arrow key. This ability allows you collect items that are out of reach, and also avoid many of the dangers. That was one thing I noticed about this game, a great variety of dangers.

To get the real understanding of this game you have to play it. It's a lot of fun, and a great challenge. Might take a while to understand the order of things and they way you have to do them, but I thoroughly enjoyed it :) 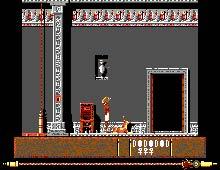