A faithful conversion of Gottlieb's 1989 arcade game that was practically unknown outside Germany. Exterminator is an unusual shoot'em up with some nifty ideas, although it may be too strange for most people. The plot in the game is similar to Disney's Arachnophobia: you are an "exterminator" who must travel from room to room, and house to house, to rid the neighborhood of a locust plague. You view the action from a first-person perspective, looking at your disembodied hand on the screen. At the top of the screen is a display which shows your "juice" meter, current score, and which house you are currently working in. To complete a room and move on to the next you must change all of the tiles in one lane to your color, while dealing with locusts that will sting you (hence reducing your juice) once they fly clost enough. There are many ways to get deal with locusts: you can squish them, pound them, or shoot laser at them. If you complete all the houses you will face the Ultimate Challenge, with a 500,000 point bonus prize. The game ends when you're out of juice and all your credits are used up.

Despite a unique premise, Exterminator gets old very quickly as each house (and even room) looks the same as the previous one, with no new surprises in store. Worth a try for a few minutes just to see how strange it is, but not much longer. Incidentally, this is the only arcade conversion ever published by Audiogenic.

The life of a pest controller must be a difficult one, at least if Exterminator is anything to go by. They apparently don't have any other means of getting rid of the pests except using their hands to squash them. And not only do they face some dangerous insects while working, getting rid of toy tanks gone haywire also seem to fit into their job description.

You play the disembodied hand of an exterminator, going from house to house, clearing out the bugs from each room. Gameplay consists of you controlling the hand up, down, left and right around the screen. Pressing the action button crushes whatever is in front of you hand and pressing the button while moving downwards pounds the floor. The insects can move in three dimensions, so you have to time your squashing carefully, at least that's what you'd be doing if the game was any good. As it is now it's hard to anticipate the moves of the free flying creatures, so you're reduced to chasing them around franticly stabbing the grab button. There are enemies on the floor advancing towards you too. These are a bit easier to hit because it's just a matter of waiting for them to come beneath the hand and then pounding. There's also a wasp flying around, trying to sting your hand. If you try to grab it it will sting you, so you have to move the hand in a circular motion to wave it away. If you move your hand to the side of the screen it changes to point forwards. Then, for some strange reason, you can shoot with it. But since you can only move up and down by the side of the screen while doing it its pretty useless. And that's about it.

The problem with Exterminator is that there's just not enough variation. While at first, grabbing flies and pounding spiders seems a bit fun, it quickly gets boring. And since the later levels don't really introduce anything new it doesn't get any better.

The graphics and sound are quite good, with some nice backgrounds and detailed enough enemies. Each house has several rooms, which look different enough, but when you move on to the next house it's just the same old rooms over again. Another example of the game's lack of variety.

Exterminator might be good for a quick five minute game, but won't keep your interest for any longer than that.

You are a pestcontroller. Get rit of the filthy liitle creatures in the houses. You can use the hands for killing the bees and stuff. 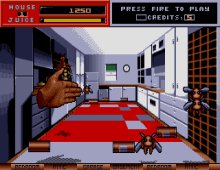 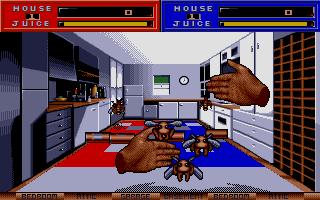