A simple and somewhat average arcade space shooter. You control a spaceship and you have to avoid a lot of asteroids and at the same time shoot down as many enemy spaceships as possible - and of course avoid getting killed by them.

What I like most about Eagle's Rider is the controls. Not only are they easy to use but with the arrow keys alone you can fast move in any direction and at the same time keep a good overview of where you are. This is especially good if any enemy spaceships are behind you since you can quickly escape them and then finish them off afterwards. Sadly this is also pretty much the only noticeable feature in Eagle's Rider as everything has already been seen in other spaceship shooters.

The graphics are fairly simple but good enough to play it and see what the different things are except for the somewhat weird animated enemy spaceships. The developers should have used a bit more time on this in my opinion. Eagle's Rider is a simple space shooter offering nothing new and in my opinion there are many earlier games (as well as new) there are much better than this one.

Eagle's Rider is a fun sci-fi shooter from Microids that sets itself apart from other shooters with innovative semi-360-degree movement. I call it "semi" because your ship can still move only in 4 cardinal directions. The game, however, uses innovative "chase view" camera angle and skewed perspective of objects to make you feel as if you have more freedom. Aside from this unconventional look, Eagle's Rider plays like other shooters-- avoid asteroids and shoot everything in sight to win. It doesn't have the same addictive quality as Silpheed, but is worth a look if you are new to action games or want a different playing perspective. 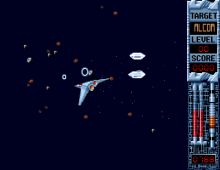