DUO is a fun "retro" 2D vertical shooter that features frenetic gameplay with minimalist/abstract graphics that seems to be all the rage lately. In a twist to normal shooters, your 'ship' in DUO is located in the middle of the screen and can only move horizontally to the left and right. This means enemies can attack from above and below your ship. Your ship can also shoot both ways at the same time, although this takes some getting used to, especially since weapons on each side are different, and can be upgraded indepedently by collecting power-ups. Some of the later levels allow you to 'switch' the two sides so you can share the weapons.

True to the game's minimalist approach, all enemies are abstract shapes - circles, triangles and so on. Similar to Asteroid, the large circles break up into smaller ones once destroyed. Moroever, enemies with different colors react differently to the walls. Although the first 2-3 levels are easy to the point of tedious, the pace picks up quickly from there, and soon you will be struggling to deal with all sorts of bouncing and self-dividing enemies.

DUO adds a number of nice features that, while not revolutionary, are not common in SHMUPs. At the end of each level, you are awarded and points for a number of areas including accuracy, as well as the number of times you manage to avoid being hit or catch power-ups. In addition to points, you are also rewarded with time bonus, free weapons upgrades, and shield recharges. Another nice feature is the ability to save every 5th level - a welcome change from typical shooters that force you to restart from the beginning.

There are 3 game modes in DUO: Challenge (the default), Time Attack, Survivor. If you manage to finish the Challenge mode, the other two modes add significant replay value, and make the game well deserving of a permanent spot on your hard drive. Last but not least, you can turn off special effects if you think they distract from the game, and use your own music tracks in the game.

DUO is a very polished freeware game in every respect. I couldn't find fault with it, other than a few minor, and very rare, bugs that crash the game once in a blue moon. Highly recommended to SHMUP fans. 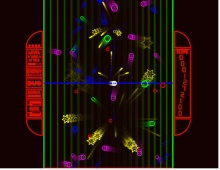