Hard Hat and Hard Hat 2 are excellent 2D platformers based on robot from CAPCOM's popular Mega Man (Rockman in Asia) franchise. In the author's words, "...the game is a single player game where you play as a Met[, an enemy robot] in the NES Classic Mega Man. Hard Hat is PO'd ar Dr. Wily for always treating him like dirt and decideds to go fight against him with Mega Man. His timing could not have been better because Mega Man had just suffered a crushing defeat against Metal Man. Be warned, Hard Hat is VERY hard."

Both games will delight Mega Man fans with authentic, addictive gameplay from the NES series, coupled with new storylines and "boss" monsters. Although graphics are "ripped" from original games, they are superbly arranged to create new levels that are much harder than the originals. Fortunately, Hard Hat can gain new weapons and abilities much like Mega Man does - typically after defeating each boss.

Although it looks and plays just like Mega Man, be warned that both games are very difficult. The enemies are far more numerous, and Hard Hat takes more damage than Mega Man (probably because he is so much smaller). If you consider yourself a joystick expert, though, you will definitely have much more fun than frustration with these two classics. I have a few minor gripes: there are too few enemy types per level, and there should be many 'save points' in each level to help out incompetent fans like me. But all in all, both games deserve to be considered part of Mega Man's canon, and are must-haves for every fan of the franchise. Highly recommended. 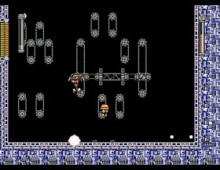