Douglas Circumstance is an excellent anime-style platformer that will appeal to anyone who misses the days of 8-bit consoles. Darren McLeod's review at Total Klik says it all:

"If any of you grew up on the NES as a child, then you might as well skip this review and hit the download link. This game is so true to the 8-bit games that it might just bring a tear to your eyes. Before games had budgets of millions of dollars, and before games had batteries in them to save your game, they relied on two things: gameplay and difficulty. Douglas Circumstance from Riko at Fallen Angel Industries brings them both in spades.

Right when you start up this game and see the title screen you will realize that Riko has strived to create the mood of this game being 8-bit. If you hadn't downloaded it yourself, you might think it was running off an emulator. It is that convincing. Once you start into the game, yuo'll notice that the game is extremely true to gaming's roots. The characters have brown outlines, and are composed of few colors. The explosions aren't animated, they are merely one frame. The game doesn't try to impress you with cutting edge graphics, but instead gives you a very clean and crisp look, and I honestly can't imagine this game any other way. The graphics look spectacular and even if Riko used a full palette of colors I don't think it would've looked this nice. The graphics compliment the engine, which works just as you'd expect a game like this to. The jumping feels perfect, and the animations look great. When you don't touch a button and Douglas takes a breather, it is one of the most effective filler animations I've seen in a klik game. Ever. The look of the game flows perfectly with it's music, which was composed by TwiTerror. Twi did a great job of creating music that is not only catchy, but also very reminscient of the music found in NES games. It sets a great atmosphere in an already great game.

The most controversial part of Douglas Circumstance is probably its difficulty level. It's very obvious once you get to the second level that this is not an easy game. It's one of the hardest klik games I've played, especially in level 5, but even when you are frusterated, you won't give up. The game's engine is so solid and the levels were so well designed that the only thing that can be blamed for Douglas' constant deaths is the gamer. You still get frustrated, but you understand that it is your fault, and it makes you try harder to memorize every enemy and platform location, and exactly how you have to time each jump.

If you like platformers, side scrolling shooters, classic NES games, or just any game in general, I can't recommend Douglas Circumstance. And at only 613K, it's a quick download and one that you won't regret." 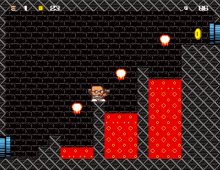