Another excellent game from freeware developer Yamada No Ana Project, who is dedicated to producing games based around the same cast of characters, led by Doka-chan, a stubby construction worker and his friends. Like all other games from this group, the game is 100% English, boasts excellent music, offers 2-player hotseat mode, and allows you to change control keys from the Options screen.

Sequel to the original Doka-Chan no Block Kuzushi, Doka-Chan no Block Kuzushi 2 is a nice-looking Breakout clone that doesn't offer much innovation, but is a competent one anyway. The goal should be familiar to everyone by now: make all the blocks (in this case steel beams) in the level disappear by bouncing a ball on them from your paddle (in this case Yamada, a construction worker carrying a steel beam on his shoulders). The game is a tad too boring for me, mostly because the ball is very small compared to the size of each beam you have to knock, and surprises (extra balls, power-ups, etc.) are few and far between. Most of the beams also take two or more hits (they change color each time) to disappear, making the gameplay a relatively tedious, drawn-out process as it can take a long time before you clear the screen.

If you enjoy Breakout games with good graphics, Doka-Chan no Block Kuzushi 2 may be worth a try. If you're looking for the next generation of Breakout games, though, this is not it - go play DX-Ball 2 instead ;) It's fun for a few minutes at a time, though. 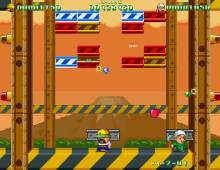