Dogma is a Japanese fighting game that suffers a bit for being not completely finished. For some reason, the development stopped, so we have only a single background, a single BG music (though it's quite a good one), no endings (not even some credits rolling), practically not configurable keyboard controls (you can only change functions between the predefined keys) and no difficulty levels - the only way to get an easier challenge is reducing the other player's energy in the options screen. There should even be a secret character named Sayuri, but... There are no files related to her...

The rest, however, makes up greatly for these lacks. The nine characters are well-done in every aspect: good characterization (and don't forget their portraits in the selection and VS screen: beautiful), great and fluid animations, many special moves with a lot of spectacular graphic effects. Each one is available in eight different color palettes, and there's even a secret menu in the options to edit them! The most powerful moves require the pressure of two attack keys together, and for this reason there are four shortcut keys too. I had many problems with the standard layout, which forces the player to use the left hand to move, until I found out that the "Dolphin-Mode" option enables another keyboard layout (see the reference card). There are no more shortcut keys for easier super moves this way, but it isn't a big deal since the keystrokes detection is always flawless - in fact, I hardly ever used the shortcuts even in normal mode :) Fast, fun gameplay and combative AI ensure a good challenge for a game that, if brought to 100% completion, would rival many commercial productions in quality. If you like fighting games, however, don't miss it in any case.

Prepare To Be Hurt! 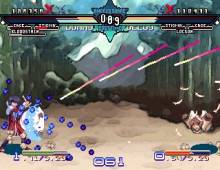