Commercialized marketing tie-in games usually do not get a mention in gaming magazines, and for good reason: they are typically awful. Cap'n Crunch's Crunchling Adventure, however, is an exceptionally well-designed game that is a lot more fun than many commercial titles.

As you would expect from a CD-ROM game bundled with 2 boxes of Cap'n Crunch cereal, this is a simple kid-oriented game. The premise is that the Crunchium Mines at the center of the earth have been taken over by Crunchium Thieves. The Cap'n negotiates with the Thieves into letting the fate of the mines be determined by an athletic challenge between a Crunchling and a Thief. The Cap'n brings you in to help raise and train a Crunchling to compete in this important contest.

Gameplay-wise, Crunchling Adventure is really 3 mini-games in one. There is a "home" that isn't much more than a decision screen, where you can pet your Crunchling (to make him happy) and you can feed him any of 3 Cap'n Crunch cereals (they've omitted All Berries for some reason). From this home, you can take your Crunchling out to different worlds to work on his 3 skills: speed, jumping, and strength. Each of these is a separate mini-game, where you try and get the best score.

Interestingly, the more times you play each game, the better your Crunchlings' skills are the next time you play. I thought that once I had gotten the hang of the 3 mini-games, it would be repeating the same steps over and over until the end of the game. Fortunately, I was wrong. After you get your basic skills mastered, your Crunchling grows to a bigger size. The games change difficulty once you change, adding a few obstacles and increasing the overall speed. This happens twice, and once you're an adult, you can Challenge the Crunchling Thieves to win the game.

When you decide to go for it, the game will randomly select one of the three mini-games, and pit you against the Thief. I found these to be extremely easy, although they would probably prove challenging to the target audience of young gamers. The graphics are well-drawn in funny cartoon style, although the framing animations are a little blocky in places.

Overall, Crunchling Adventure is a neat, respectable tie-in product that doesn't feel too commercialized. It's fun, simple, and best of all, it's free (provided that you like Cap'n Crunch cereal). Too bad it was discontinued only after a few months, and non-US gamers never had a chance to try it out at all-- until now, of course :) 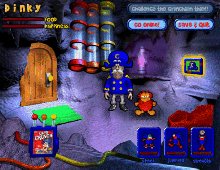