Destruction Zone, or D-Zone for short, is a fun tank battle game that allows up to three players and up to six robots to fight through rounds and accumulate money and points. The players each shop for new weapons and tools every three rounds. The enormous number of weapons and tools with well balanced prices and properties made the game a lot of fun, and quite popular in the shareware scene when it was released in the early 1990s. As the game's designer Julian Cochran describes on his website: "I received over five hundred registrations, mostly from the USA, from enthusiastic D-Zone players. I received an even larger number of letters with wonderful suggestions about what should be included in the next version. I stopped working on the game in 1993."

D-Zone is basically a multiplayer tank game that puts you in control of a tank (looks like a triangle on screen), arm it up, and blow away all your opponents. In addition to buying the huge variety of weapon upgrades, you can also save enough money to buy a new, more powerful tank. There are different computers to fight against, each with its own style, and you play team games in which each team has to destroy the other team's base. Overall, D-Zone is yet another testament to the time-tested truth that good gameplay never dies. If you can overlook primitive, minimalistic graphics, D-Zone will provide hours of enjoyment especially against other human players. 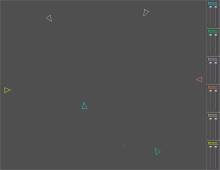