Devastator is a neat little first person space shooting game included in the August 1984 issue of Compute! magazine. The premise: a menacing alien ship named Devastator has deployed several ships sent to place detonator charges on the Earth. As the last line of defense, your job is to shoot them down. You face one ship at a time, and have 10 seconds to shoot it down before it places the charge. It takes 10 charges for Earth to blow up, which means you will win the game after shooting down 10 ships. A quirky little game that is more notable for its historical significance as one of the earliest PC games distributed with a magazine.

The game was created for Compute Magazine in 1984 by David R. Arnold. 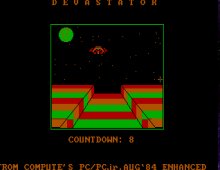 People who downloaded this game have also downloaded:
Strike Base, Die Slave, Frenetic Plus