Demon Stalker is a game with many similarities to Gauntlet. You can play the game either alone or together with another human player. You run around in some kind of dungeon and the main point in the game is to find the exit to a new dungeon but of course there are different things that will make it harder for you. Among those things are several different monsters and enemies, locked doors and much more.

The actual gameplay is quite addictive like with Gauntlet although everything is not as good as with Gauntlet. The controls are a bit difficult since you can't easily move both right and up at the same time which gives the monsters an advantage. The actual overview in the game is not that good either since you can't view much of the area at a time and you often run directly into a monster because you can't see what's on the next screen.

There are still several good points in the game though like the items you can find on your way as well as the many items included such as an invisibility potion. The graphics aren't impressive but they are good enough in order to keep up with the quite addictive gameplay. Well worth a try and if you are already familiar with Gauntlet you will like Demon Stalker as well.

This relatively unknown top-down dungeon romp was one of the first RPGs that include a full-fledged dungeon editor program that allows you to design dungeons easily with a mouse-based interface. The game itself is less appealing, as it's a typical dungeon RPG where you control a party of 4 characters in search of treasures. Still, it's a solid cross between Gauntlet and Bard's Tale that allows 2 players to play together. Recommended. 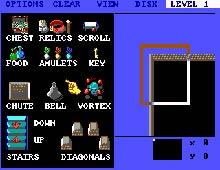