Demon Blue is a simple, average platformer from MicroValue, done in a cutesy cartoon style similar to Virgin's better-known Cool Spot. You are a blue demon, and your job is simply to make it to the end of each level, collecting power-ups and blasting other hellish creatures along the way. There's really not much else to say about the game - the levels are decent, although lacking graphical details (the background is black most of the time, and it is sometimes difficult to differentiate between power-ups you can pick up and stationary scenery objects). Fun for the first few minutes, but lack of gameplay and level variety make Demon Blue an average game that won't hold anyone's interest for very long.

Demon Blue is and odd little game. And when I say (well, write I suppose) odd, I mean odd. You play a little blue demon that doesn't really look much like a demon. It looks more like a blue egg with feet. As this demon you have to make your way through a series of levels, destroying increasingly weird creatures as you go along.

The problem with Demon Blue is not one defining thing, it's the many niggles that just get in the way of the game being any fun. For starters, the control system has some serious faults. If you're facing left and jump, then try to go right your character won't do a damn thing. You have to make him turn right before jumping, and then you can jump and go that way. This might sound like a small thing, but when playing the game it annoys you no end. Some of the bonus items also look very much like enemies, so sometimes you jump on something that you think will get you a few points and instead you loose a bit of life. To me, that's just sloppy game design. The same goes for the level design which is unoriginal and boring. Another thing that gets in the way of the fun is how cluttered the screen is. The enemies are too big, things move about and there's generally a lot of this going on. This makes it hard to focus and can be irritating.

The graphics then - they're rather good actually. The enemies all look very strange (they seem to have some strange angelic/demonic theme going on) seem to at least have a little thought put into them. The same can be said for the music which is nice and catchy. Nothing you'd remember for long, but considering how sloppy the rest of the game feels, it's a high point.

The bottom line is that Demon Blue just isn't much fun. There are specs of a good game hidden deep beneath the surface of all the bad things about it. Just avoid it and play something else. There are so many good plat formers out there that there's no reason to stay with this lazy effort. 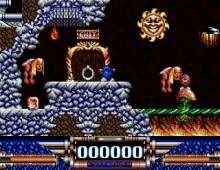