Oh Donkey - what have they done to you? This obviously is a clone of the classic Donkey Kong. The objective is to free the woman that is being held prison by a monster monkey who's name in the original is Donkey Kong (no name is given here). Donkey (aka his unnamed brother) is throwing barrels of oil at you while some flames are creeping up from the bottom. Once you manage to safe the lady you got to take her to your cottage - which I found impossible as the way is simply destroyed by a barrel that's being thrown by an angry uber-monkey.

Anyway - be assured the gameplay of this version is much worse than the graphics. *coughs* The only speed that it seemed to be playable at was 3 - at 1 and 2 it was waaaay to slow, at 4 too fast and at 5 it was over before you realized it had started. This game is obviously an amateur version and it might have run very well on XTs, however on today's computers it's not really... well, you know. Not a big hit. 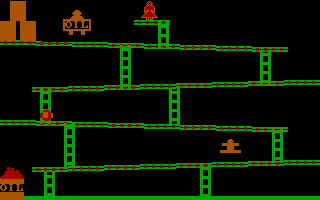