Darker is a very atmospheric spaceflight simulator that, ironically, pays too much attention to atmosphere at the expense of playability. You are the Delphi, one of two races on a curious planet where one side is perpetually in daylight and the other is perpetually in darkness. Your task is to fight the Halon, the race which is in control of the light side of the planet, to wrestle controls from them. The problem is, your race is hopelessly behind in the technological race, so your shuttle is very slow and rickety at best...

The graphics in Darker is much better than most games of its time. The city you're defending is nicely realised, with convincingly varied scenery and attention to detail, like the clock tower which chimes as you putter past. Once you get over the "oooh" effect, though, you'll quickly find that Darker is far from a walk in the park. Your shuttle is rickety, and I do mean it: fire too many shots in a row, for example, and the power drain causes you to fall out of the sky. It's so much of a struggle just keeping your shuttle in the air, that when you finally shoot down hordes of menacing enemy fighters with unguided missiles, it feels like a real triumph. Your engineers are constantly striving to invent slightly better craft and weaponry, and the sense of urgency as you grimly try to hold on against the growing threat of the Halons comes across very effectively.

But atmosphere can only carry a game so far. All that you get to do most of the time is launch your ship, fly around at random looking for some enemies (you're told they're "near the canoe factory" or whatever, but not where the damn thing actually is), shoot them down and fly back to base and start again. Now and then you'll get a new weapon thanks to your engineers, and a new type of enemies to try it against, but basically you're just doing the same thing over and over against ever-increasing odds, and it gets very frustrating very quickly, even though you do have unlimited lives. At first, the damage system makes for an exciting addition to the game, as bursts of dogfighting are interspersed with lulls as you fly off to recuperate. But as enemies become more numerous, it rapidly becomes frustratingly and absurdly difficult, especially since the Halon's guided missiles are very difficult to avoid and cause irreparable damage. Worse still, you can't return to base for repairs - they won't let you back in until you've completed a mission, so if you take a couple of hits early in a mission you might as well crash into the ground and start again.

All in all, Darker is a good-looking game that requires a superhuman effort, skill, and patience to finish. The game does try to liven up the gameplay in later missions, such as some tanks that serve as ground targets, and underground tunnels you can fly in. Unfortunately, most players will give up long before they see those new elements. Recommended, but only to the masochistic pilots and hotshots who scoff at the "hard" level of X-Wing. 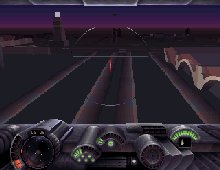