MobyGames says it all: "Dark Castle is a platform game that relies more on timing and careful planning than quick reflexes and shooting things. It's clever--a thinking man's platformer. One thing that contributes to this is a completely 360 degree firing direction. When you throw a rock, you can rotate your arm to any angle. This takes time to learn effectively, but after about half an hour, it really helps knock out some enemies threatening to get you." Fun, but frustrating :)

I grew up on platform games. Large portions of my childhood were spent getting to a certain place, edging to the last pixel of a platform (falling of the end frequently), jumping, missing my target and either falling to my death of having to play through half a level to get back to where I was. Repeat this process at least 20 times until you finaly make the jump, only to crew up on the next one. Is it any wonder that I have grown up with "issues"?

Anyway, Dark Castle is a platform game, and rather a good one at that. Fight, um.. jump and solve puzzles in your quest to defeat the evil Black Knight. The game has quite an interesting 360 degree aimaing system, so that when you want to through a rock you rotate your arm until you get the angle that you want. It take a while to get used to but it adds a little bit to the fun of the game.

From the box cover : "So real it's frightening. Taking complete advantage of your computer's sound and visual capabilities... " Well.. when compared with the MAC version the graphics are superior (they're in colour for a start ;)) but the sound in the game is of an extremely poor quality. The MAC version used 8bit sounds, the PC veriosn uses 1bit sounds - you do the math. Not a particularly outstanding game, but fun nonetheless.

You enter a darkcastle in which you can play different levels. Eliminate enemies and watch out for rats. There are 3 difficult levels to play the game. 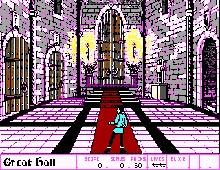 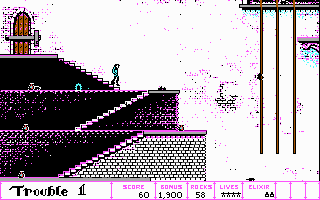