Cybernoid is an excellent PC remake of a classic Spectrum/Commodore shooter, released by Hewson in 1988. Although it looks like a typical 2D side-scroller, only a few minutes with the game will reveal a well-designed balance between strategy, action and even puzzle elements that will keep the action experts happy for hours on end.

A brief plot and description of gameplay from the remake's official site goes as follows: "Evil pirates have ransacked the Federation's storage depots, stealing valuable minerals, jewels, ammunition, and the latest in battle weaponry. The player takes the part of the brave Cybernoid, picked to retrieve the valuable cargo and destroy the pirate hoard. Apart from human adversaries, the Cybernoid also has to battle his way through the planetary defense system that the dastardly pirates have activated in order to stop the hapless hero from completing his mission. Add to that the time limit imposed on returning all the cargo for each level, and it can be seen why only the brave - or the foolhardy - volunteer for these tasks.

The Cybernoid isn't entirely defenseless, though: apart from the standard lasers, his arsenal also consists of bombs, mines, shields (used to provide limited invincibility), bouncing bombs, and heat-seeking missiles. Needless to say that stocks of these items are limited, although collection of the yellow canisters occasionally dropped by pirate ships increases the currently selected weapons stock by one. Other items that may be collected include the Federation's stolen booty, objects that alter the appearance of the player's craft and extra external weaponry that can be used on the more difficult screens. As the Cybernoid travels through the pirates' flick-screen territory, he is hampered by their activated defense systems. These take the shape of gun emplacements, missile launchers and so on - tricky to pass, but easily eliminated with the extra weapons. Once a level has been cleared and the cargo collected, the Cybernoid then heads for the level depot, where he is informed whether or not he has collected enough cargo to warrant being given a bonus."

Like its 8-bit original, this PC remake boasts outstanding graphics and fun gameplay. The sheer variety of everything - background graphics, enemies, power-ups, and weapons - are enough to engage arcade fans for weeks. But it is the masterful integration of non-action elements that elevate Cybernoid above the shooter norm. Similar to hybrids such as Manic Miner, you can often choose the route to take, which means the replay value is quite high. With dozens of attractive screens, inventive power-ups, and a more in-depth gameplay than most shooters, Cybernoid is a must-play for all arcade fans. Be sure to also check out PC remake of the sequel Cybernoid 2, also on this site. 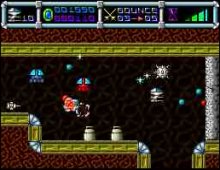