One of Tomahawk / Coktel's few action games, Cougar Force is a decent platform game starring you as member of Cougar Force, an elite commando team. Your mission is to penetrate the criminal's fortress to retrieve secret information about a new drug. Gameplay is mostly shoot-anything-that-moves variety, although there are some puzzles that are realistically integrated into the game's storyline. For example, you are empty-handed at the start and must look for some weapons, as well as access to inner rooms. The action is well-paced, although expert action gamers will frown at the downright dumb enemies who never seem to avoid your fire. Bland weapons and repetitive enemies make the game boring quite fast, although those who persevere will be rewarded with some nice plot and gameplay twists near the end. 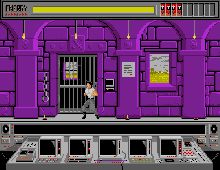