Changoo 4 is the fourth and best entry in the Changoo series, fanmade games based on Crayon Shin-Chan, an excellent humorous manga (and now anime) series that is wildly popular in Asia but is rarely known outside the continent. If you're not familiar with Shin-Chan, just picture the naughtiest but not-so-bright 5-year-old you can think of, who lives with a flirtatious, often-drunk father, a parsimonious but forgiving mother, and a baby girl who gets much more attention from everyone.

The game starts out as a standard 2D side-scrolling platformer, starring you as Shin-Chan taking a walk in his neighborhood. You will need to avoid and attack crazy upper classmen (most of whom are women, to Shin-Chan's delight) and other assorted hazards including unfriendly animals. The game gets more and more wacky the more you play, and before long you will find Shin-Chan riding a spacecraft fighting colorful enemies, and having fun in various mini-games. The mini-games are all excellent, and once you find them in the game you can play them separately from the main menu screen. The first mini-game is a fun clone of Dance Dance Revolution arcade game, which is available from the "mini games" menu from the beginning.

Changoo 4 is a thoroughly entertaining and polished game - with cartoony graphics that look like they have been ripped directly from the Shin-Chan anime, the game could pass for a commercial title. Shin-Chan himself is very well animated - down to the naughty little actions (stripping down his shorts to "moon" you, for example) he does when he's not moving. The only downside from the perspective of us non-Koreans is that the game is in Korean, so if you don't know the language, you won't be able to understand the exchanges Shin-Chan has with various people in the game. This is an action game, though, and it takes only a few minutes to learn the controls and what each menu option means. All in all, another excellent freeware old game from Korean's budding freeware scene. 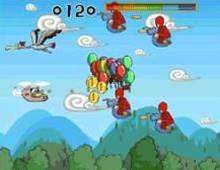