"The future, mankind has left its home planet of Earth in search of new inhabitable worlds. Such places were indeed discovered and colonized. Life seemed to exist all over the galaxy. Intelligent lifeforms weren't to be found though. The research of unknown planets was led by Cerberus, an interstellar vessel with the task to study alien lifeforms found in space. The ship was made to assure no aliens would come in contact with humans before careful examination. The security systems were impossible to penetrate. Or so it was thought." After collecting samples at the recently discovered Morgani 4, Cerberus begun its journey back to the base planet of Frichi. But soon after the departure, priority one alarm was set off in the command deck. An alien had somehow broken loose...

Cerberus is an outstanding anime-style freeware 2D action game that provides much more play value than its tiny screen may suggest (it only looks tiny if your desktop is set to 1024x768 or higher, though). The game is reminiscent of Nintendo's Zelda, but with more emphasis on nonstop action and exploration. Aside from crisp and smoothly animated grapphics, Cerberus features excellent freedom of movement. There are often multiple exits from each room, some of which will be inaccessible until much later on. Although this may sound like a lot of boring back-tracking, all the levels (basically rooms on the ship Cerberus) have been designed in such a way that you always find yourself in close vicinity of where you need to go next.

As in most action games, there are plenty of enemies - in this case mostly green aliens - for you to dispose of with various weapons. One thing that may irk some gamers is that monsters are re-spawned every time you re-enter a room, but on the upside you will be able to collect a lot of missiles and power-ups this way, since most monsters drop them right before their death. Similar to Zelda, the action is interspersed with physical puzzles, most of which involve pushing switches - often in the right order. Another puzzle element comes in when you fight certain enemies and 'boss' monsters: they often can only be killed with a particular weapon, and finding out which weapon is effective on what alien is part of the fun of Cerberus. There is a good variety of weapons to use, including long-range guns and close-combat weapons such as the saber. One nitpick I have with the game is the console-style save game method. In order to save, you must find Datapods which will give you passcodes (in addition to restoring lost energy, i.e. life points). These Datapods are too few in my opinion, but that is perhaps only because I am too inept at this kind of games :) Multiple difficulty levels would have been nice for joystick-shy gamers like me, but the game is not overly frustrating or unfairly difficult. All in all, a charming and fun action game that will surely please fans of Zelda and action genre in general. 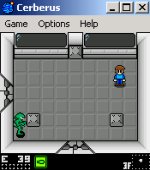 People who downloaded this game have also downloaded:
4D Prince of Persia, Captain Comic II: Fractured Reality, Contra, House of the Dead 2, The