Oh yeah - we played this for hours back then and exchanged strategies for the tournament-opponents at school. The game itself is divided into two parts. The first part is "just" the training you need for the big tournament. Become familiar with Karate, Nunchaku, Bo and Kendo to be able to use them against your opponents effectively. You shouldn't leave the training parts before you are able to defeat the Shodan in each of those forms of fighting. After every training fight you get advice what to improve in the future and finally you will be able to make some good fights.

When this time has come you enter the halls to fight the big Budokan Tournament. Each opponent got a different way of fighting and not all stick to the martial arts you learned. You can choose how you fight them, but you are only able to use each of your learned skills for four times. If you decide you need to fight with the Bo against the early opponents you won't be able to use it in the end when you really need it. Be sure to use Karate early - it is not very effective against the really good fighters. Save up Bo and Nunchaku till the end - they are more effective. Sometimes you can also rely on Kendo in the end, but your range of moves is very limited so you might also want to use it in the beginning when you would first tend to use Bo. Alright - enough about tactics - go and fight!

Bukodan is a Fighting Game from 1989 that i would say is one of the overall funnest fighting games i have ever played. It has Sublime features that really prove that the original concepts of 80's videogames lead to much funner games than the current Shoot Em Up's.

In Bukodan you play the role of a martial arts student. The point of the game is to win the Martial arts tournament called Bukodan (Funny that =D). In this tournament, Completly Different Martial arts can be used by different combatents against each other. However, what makes bukodan really interesting is that u can use 4 different martial arts. The martial arts avaliable are Karate (Unarmed), Kendo (Long sword-like sticks), Nunchaku (Nunchuks - 2 small sticks linked together by a chain) and Bo (Staff combat). There are 4 different dojos, one for each form of martial art, where u can practice moves without an opponent to work out moves, or against a AI simulant, which at Shodan level is sometimes hard to beat. There is also a Sparring Mat, where you can fight against the computer with him using a different art from you, our your friend by sharing a keyboard. The Bukodan is very challenging. You are only allowed to use each martial art 4 times in the tournament, so you must be good at all 4 styles to stand a chance. They do not all use Styles you can use either..

Graphics are good for 1989, with large,clear sprites and fluid animation (if you dont button bash). Controlling and fighting with the charecture u are is easy, with button bashing avaliable but it will always lose to skillful blocking and attacking the enemies unguarded area. Sound, well, there was no sound for me, due to me having sound card incompatibility troubles.

The game does have flaws that would definatly make it better - Allowing You to pick another charecture for multi so u dont get confused would be my major grip, and a more even fighting system (i found karate to be too weak againt the others) would improve gameplay, but overall a very good example of the great games of old.

This is one of the best fighting game ever made for the PC - featuring 4 Japanese sports. The excellent and thorough review of the Commodore 64 version at Stadium 64 says it all about why this game should be on your hard drive:

"After some neat graphics and a great little tune which sets the mood you find yourself outside the gates to the Tobiko-Ryo Dojo where, before you can enter to train under your new Sensei, you must match a crest to a list provided (less brain cells than fingers required here). A little care is needed 'cos get it wrong an' you can only practise. A courtyard lies beyond, off which are the four dojos where you train in the disciplines of Karate (chop, chop), Kendo (big stick), Bo (even bigger stick) and Nunchaku (sounds like nutcracker and best describes it). The next thing that strikes you is the mind-numbing selection of moves available, no fewer than 29 for the Bo! Plenty of joystick bending required here (at one point the guys had to unite my fingers).

In the dojo start on Jiyu-renshu, to practise the mass of wicked, bone-crunching moves alone. When satisfied with your control, move on to Kumite, the sparring section where a white-haired instructor knocks seven bucketfuls out of your unworthy hide until you get it right. There are three instruction levels: Sankyu (easiest), Ikkyu (more difficult) and Shodan (most challenging). When sparring, your stamina and Ki bars come into play: Stamina's lost as you move or strike but mostly when you're hit. However, it can be regained by avoiding the other huy and not attacking (a bit like Chris Eubank). Ki is the energy of the universe, the essential life force that flows through and around us (the silly notion that if you concentrate really hard you can put your head through a block of ferro-concrete). The idea's to build up Ki by not attacking and not getting hit, the more you collect, the more damage you inflict when you kick butt. Ki is lost when you wallop someone, when they wallop you and if you're pushed off the mat during a bout. After each bout, the instructor analyses your performance, telling you if you need to improve your speed or style and how your Ki is flowing - and let me tell you mine was flowing like Niagara (my Ki, you filthy beast!). Do this for all four disciplines then toddle along to chat with Tobiko-sensei who lives in what looks like a lrage garden shed at the top of the courtyard.

It's time to hunker down for some serious wisdom-getting as Tobiko tells how you probably aren't ready for the Budokan tournament but you can go if you want (how kind!). So off you go all over the world in search of fame, fortune and a fat lip. The Budokan consists of 12 different opponents of increasing levels of difficulty who, in some cases, have moves you won't have seen, not to mention completely new fighting styles. Such was the case with Jimmy on Level Three: blow me I thought, the little yellow fellow's got a Wok on his head. I then proceeded to get a right good wok-ing myself!

Ah well, I'm off to compose great soiritual death poem... 'My life was like a bowl of rice pudding, fully rounded but over, too soon'. Not bad eh? (Get on with it pillock - Man Ed.) There only a couple of niggles with the game. One is the faffing around changing between the two double-sided disks: quite time-consuming but not as I had at firest feared, leading to frustration, as the anticipation levels remains high throughout. The other is slow gameplay which at first made the thing look very pedestrian. However, what this really achieves is to give you time to plan and choose your attack (time well needed bearing in mind the array of moves available and the need to build up Ki). As a result it doesn't degenerate into a frenzy of joystick waggling with the sprites leaping about like the epileptic March hares. On the whole this sums up Budokan, a game treading the fine line between frustration and anticipation and just coming down on the right side."

Multiply the fun of the C64 version by 10 times, and you have this wonderful PC game that, for once, is far superior to the other versions. 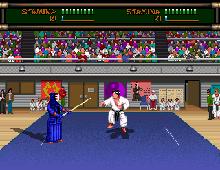